Eurocard is a European standard format for PCB cards, which can be plugged together into a standardized subrack. The subrack consists of a series of slotted card guides on the top and bottom, into which the cards are slid so they stand on end, like books on a shelf. At the “back” of each card is one or more connectors, which plug into mating connectors on a backplane which closes the rear of the subrack.

See the SRS range of 19″ subracks and enclosures

The Eurocard mechanical architecture was defined originally under IEC-60297-3. Today, the most widely recognized standards for this mechanical structure are IEEE 1101.1, IEEE 1101.10 (also known commonly as “dot ten”) and IEEE 1101.11. IEEE 1101.10 covers the additional mechanical and EMI features required for VITA 1.1-1997(R2002) which is the VME64 Extensions standard as well as PICMG 2.0 (R3.0) which is the CompactPCI specification.
The IEEE 1101.11 standard covers rear plug-in units that are also called rear transition modules or RTMs.
The Eurocard is a mechanical system and does not define the specific connector to be used or the signals that are assigned to connector contacts.
The connector systems that are commonly used with Eurocard architectures include the original DIN 41612 connector that is also standardized as IEC 60603.2. This is the connector that is used for the VMEbus standard which was IEEE 1014. The connector known as the 5-row DIN which is used for the VME64 Extensions standard is IEC 61076-4-113. The VME64 Extension architecture defined by VITA 1.1-1997 (R2002).
Another popular computer architecture that utilizes the 6U-160 Eurocard is CompactPCI and CompactPCI Express. These are defined by PICMG 2.0R3 and PICMG Exp0 R1 respectively. Other computer architectures that utilize the Eurocard system are VXI, PXI, and PXI Express.
A computer architecture that used the 6U-220 Eurocard format was Multibus-II which was IEEE 1296.
Because the Eurocard system provided for so many modular card sizes and because connector manufacturers have continued to create new connectors which are compatible with this system, it is a popular mechanical standard which is also used for innumerable “one-off” applications.
Conduction-cooled Eurocards are used in military and aerospace applications. They are defined by the IEEE 1101.2-1992(2001) standard.
The Eurocard standard is also the basis of the “Eurorack” format for modular electronic music synthesizers, popularized by Doepfer and other manufacturers.

The height of a rack can vary from a few inches such as in a broadcast console to a floor mounted rack whose interior is 78.75 inches (2,000 mm) (45 rack units) high. Many wall mounted industrial equipment enclosures have 19″ rack rails to support mounting of equipment.

See the SRS range of 19″ subracks and enclosures

This article is licensed under the GNU Free Documentation License.
It uses material from the Wikipedia article “Eurocard (printed circuit board)”. 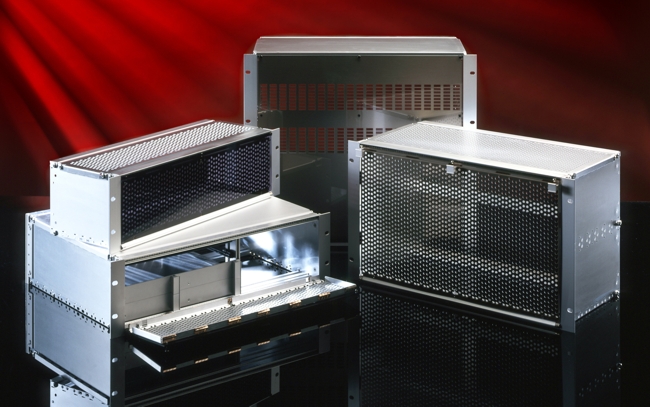 This Is A Custom Widget

This Sliding Bar can be switched on or off in theme options, and can take any widget you throw at it or even fill it with your custom HTML Code. Its perfect for grabbing the attention of your viewers. Choose between 1, 2, 3 or 4 columns, set the background color, widget divider color, activate transparency, a top border or fully disable it on desktop and mobile.

This Is A Custom Widget

This Sliding Bar can be switched on or off in theme options, and can take any widget you throw at it or even fill it with your custom HTML Code. Its perfect for grabbing the attention of your viewers. Choose between 1, 2, 3 or 4 columns, set the background color, widget divider color, activate transparency, a top border or fully disable it on desktop and mobile.

You can find out more about which cookies we are using or switch them off in settings.

This website uses cookies so that we can provide you with the best user experience possible. Cookie information is stored in your browser and performs functions such as recognising you when you return to our website and helping our team to understand which sections of the website you find most interesting and useful.

Strictly Necessary Cookie should be enabled at all times so that we can save your preferences for cookie settings.

If you disable this cookie, we will not be able to save your preferences. This means that every time you visit this website you will need to enable or disable cookies again.